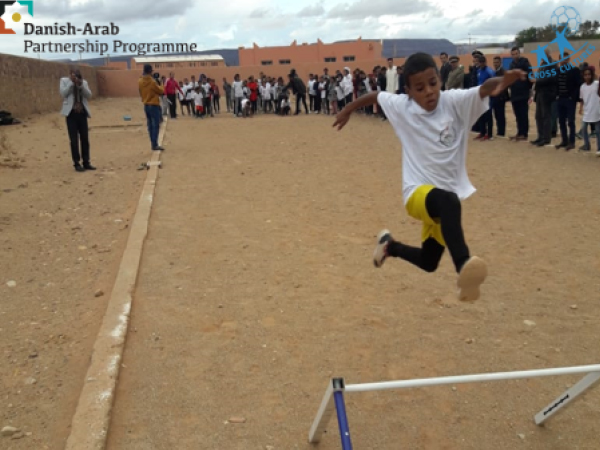 On Monday 9th of December, Cross Cultures and The Women’s Achievements and Values Association organized in collaboration with the General Delegate for Prison and Reintegration Administration, a sports day for 60 juvenile inmates of the local prison in Bouizakarne – 700 km from Rabat, Morocco.

The event took place in a festive and entertaining atmosphere, which had a great impact on the minds of juvenile inmates, and that intersect with the framework to spread the culture of sports practice in prison institutions, as a constitutional right, and to make sport a recreational medium.

Cross Cultures and the Association also organized a sports caravan in South of Morocco from the 6 to 9th of December, which included, in addition to the local prison of Bouizakarne, the city of Assa, localities of Foum Lahsen, Aday, Fask and the city of Guelmim.

The caravan program included various non-competitive sports activities such as mini football (mixed), handball, basketball, volleyball, athletics and women’s racing, as well as some of the traditional games in the region.

Around 3000 children, youth and women benefited from it, in addition to a training session in the city of Assa (900 km from Rabat) for 30 volunteers from local sports associations.

These sports activities included interactive meetings for the participants with the double world champion (400MH) Mrs Nezha Bidouane, who urged them to satiate with the optimal values of sport, foremost of which is the spirit of citizenship, good morals and correct behaviour, considering school sports as a nursery for talents and a source of champions in various sports types, not to mention their role in fighting diseases and some Social ills.