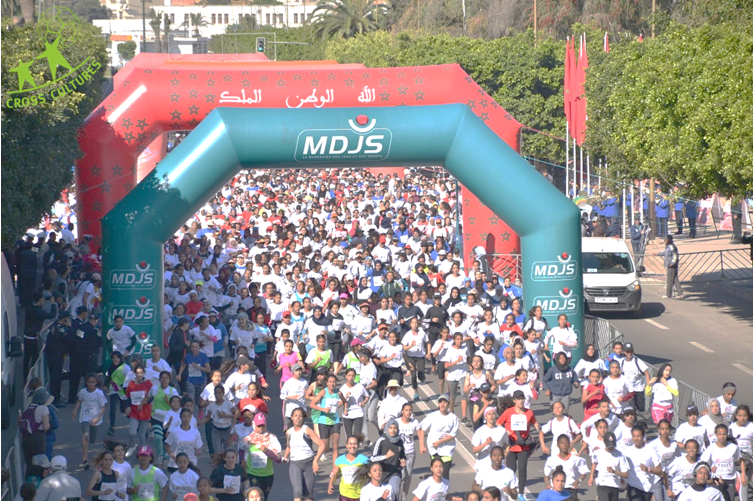 Our Moroccan partner, the Association Women, Achievements and Values, have had their 12th edition of the famous Victory Race. Cross Cultures’ youth leaders participated in the organization of the event where thousands of women of all ages and different social strata participated.

Women of all ages participates in the Victory Races.

Nezha Bidouane, the president of the Association Women, Achievements and Values, confirmed that the 12th Victory Race has reached its aim of ensuring representation of women across the different regions of the Moroccan Kingdom and the participation of thousands of girls and women of all ages.

Further, Mrs. Bidouane said in a press statement that the 12th edition of the race was characterized by the presence of Chrifa Lalla Soumya Ouazzani, President of the Special Olympics of Morocco, Health Minister Anas Doukkali, and the Ambassadors of Denmark and Sweden.

The participation of women from different parts of the contry was preceded by the National Sports Caravan for all, especially from the localities of “Annif” in the Tinguiri province, which was represented by a delegation of 40 women. 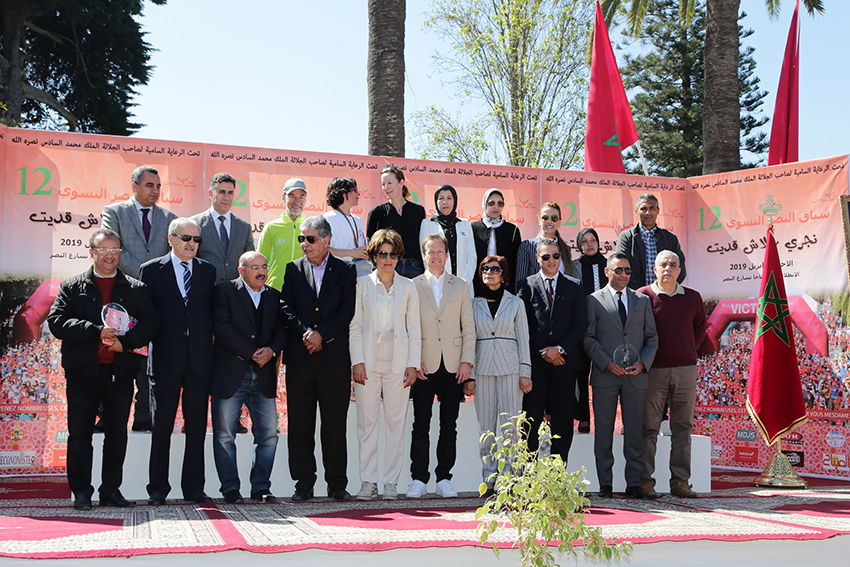 President of the Association Women, Achievements and Values together with the other official participants.

Other participants of the race were members of the Diplomatic Club accredited to Rabat, led by the President of the Club, the wife of the Ambassador of Sweden, girls from the Special Olympics of Morocco and the Foundation Lalla Asmae of Children and Deaf Youth, as well as hundreds of foreign women residing in Morocco.

The main aim of the race, which had become an indispensable annual date, was to sensitize women to the importance of sport as a means of social and professional integration and to encourage them to engage in sports and contribute to the advancement of women’s sport.

Mrs.  Bidouane explained that the race stimulates the exercise of sports, which has become a constitutional right, to maintain physical health and immunization of diseases of the age, in order to make it a way of life and enter into each home. 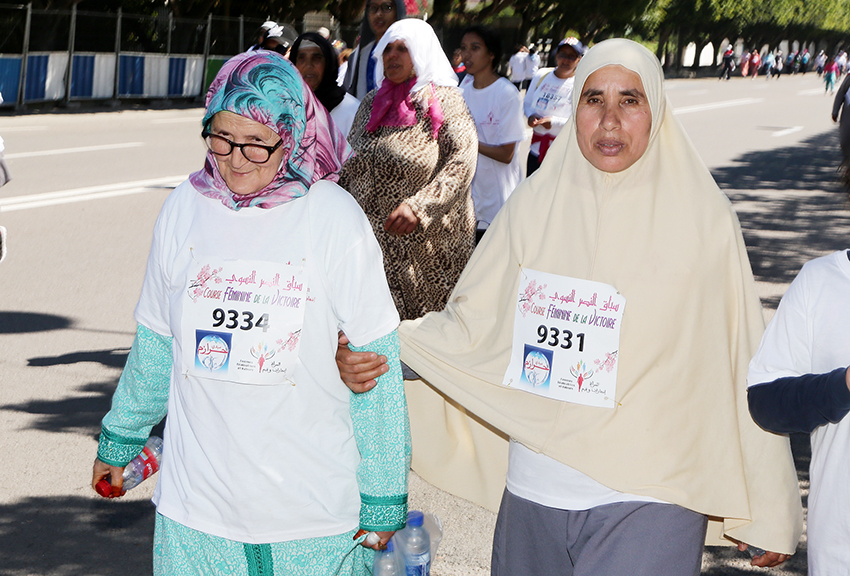 Women participating in the Victory Race.

The president of the Diplomatic Club, Mrs. Kibbon Daniel, said: “It is really a sports event that took place in a festive atmosphere, and it is very impressive, especially because it includes some of the historical monuments in this charming city.”

“The sport is a universal language. We are following all the activities of this association, which was led by the heroine Nezha Bidouane in the framework of a reciprocal partnership,” Ambassador of Denmark, Nikolaj Harris, said. He congratulates the Association Women, Achievements and Values for its success in organizing the race and mobilizing thousands of participants from various social strata and ages.

Health Minister Anas Doukkali stressed the importance of this event and said that: “organizing such races should be encouraged.” Health means the exercise of physical movement, and sports means prevention of diseases, including diabetes and the fight against obesity.

At the end of the 12th edition of the Victory Race, which was attended by a number of stars of athletics and football, a distribution of prizes took place. This included cups and medals to the winners of the race, the Moroccan Special Olympics; the Foundation Lalla Asmae of children and young deaf people, institutions of professional training and older women. 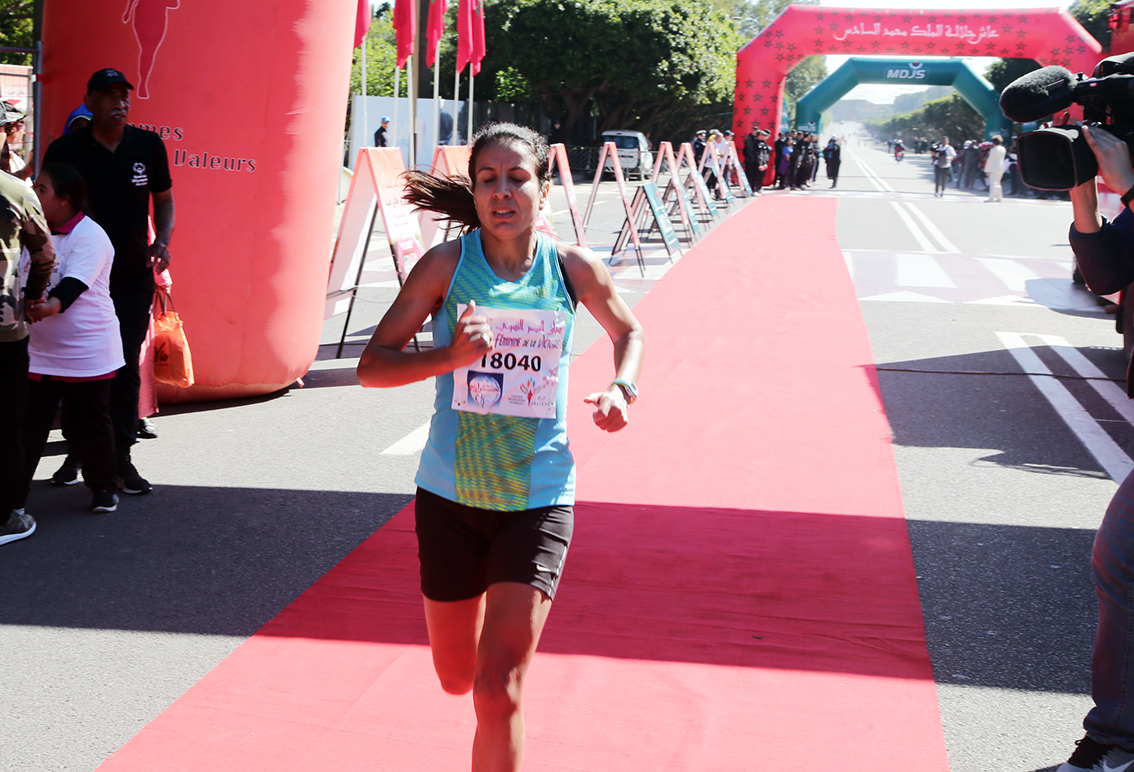 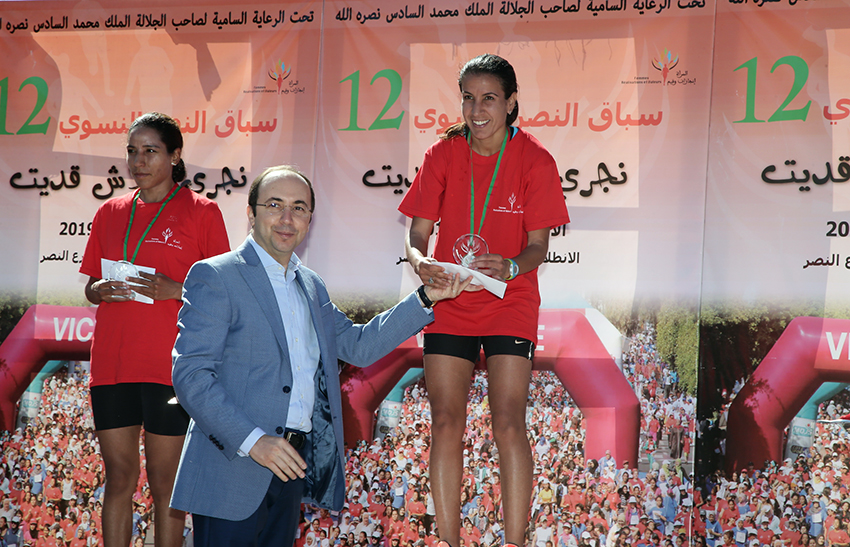 Medals for the winners of the Victory Race.