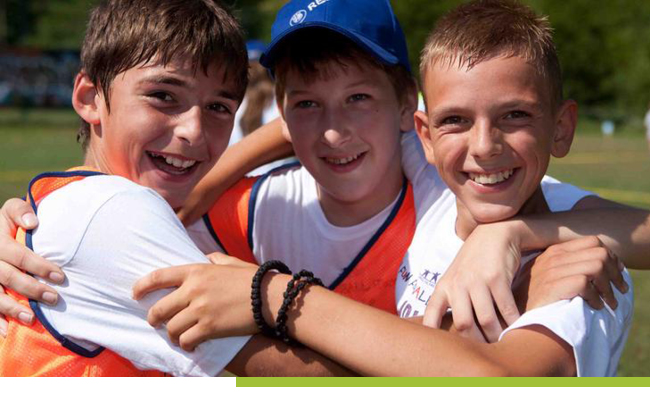 The Open Fun Football Schools programme is Cross Cultures' core activity, from which our slogan bringing people together origins.

The programme is inspired by the Danish sports model that among other things is characterized by volunteerism, parent cooperation, association culture and the basic principle of "sport-for-all". Although we use football as our hub, the program is NOT about scouting or developing talented football players. The programme is on the other hand about using our special specific child-centred and community-based Open Fun Football Schools approach as a tool to stimulate social change.

The basic idea behind the program is based on the experience of how wars and ethnic conflicts affect people and tear land and people apart as well as the experience that relief and refugee-related efforts are not just about providing protection to the victims of war, organizing shelter and distributing food, clothing, medicine and other emergency aid. If you want to use your relief proactively to reduce and prevent conflicts, reconcile people and promote stability, human rights and resilience, you need to organize your relief in a way that fosters communication and cooperation between the combatants population groups, so that the participants feel that they have something in common with the people they would otherwise see as 'others' - that they find new ways to live peacefully with each other.

It is in this context that Cross Cultures uses the Open Fun Football Schools programme as a catalyst to bring children, youth and adults to interact together across ethnic, social and religious divides in order to create new stories, new ideas and common actions. By promoting local participation, volunteering and cross-cutting social communities, and by showing and putting people's experiences into words as well as putting their resources at stake in a new way, the programme contributes as an inspiration to those seeking to find a new, peaceful and sustainable way of solving common problems.

Open Fun Football Schools: A platform for engagement and participation

The Open Fun Football Schools program has developed a unique and efficient bottom-up approach to the local communities, which Cross Cultures consider a key element to ensure sustainability and long-term impact of the program.

In Cross Cultures approach to Children’s Football, the Open Fun Football Schools do much more than building relations among children, coaches and sports clubs. It also builds a local structure for cooperation and community engagement. Thus programme gathers a number of stakeholders and actors around a common purpose, and always seeks actively to involve parents, municipalities, primary school teachers, community police, local sponsors, national and regional football associations, the local and national media, ministries of youth and sports, et. al. Hence, Cross Cultures has demonstrated capacity to mobilize a high level of community engagement and voluntarism in the program in all the partner countries, and has proved successful in stimulating social entrepreneurship and building local networks.[

Furthermore, a fundamental strength of the program is that it is an activity that spontaneously attracts thousands of children and adolescents of any geographical, ethnic, cultural or religious background, and it also attracts girls, even in countries where religious and cultural fabric often offer very limited opportunities to socialize with other young people (in 2018, 42% of all participants at Open Fun football schools were females). Thus, with the parents' acceptance and support, the program has created a framework that at the same time gives children and young people a space to have fun and play together, while at the same time learning transversal skills such as respect, tolerance, teamwork, fair play and reconciliation - themes that often lie beyond what they learn in school.

Another strength of the program, compared to the efforts of other organizations also working in the same geographical areas dealing with children and young people, is that the local Open Fun Football Schools in principle have unlimited duration. Thus, the activities become largely self-sustaining after some years of support from Cross Cultures in Copenhagen. It is seen among other things by the fact that more than 2.700 local grassroots football clubs/-teams have been formed as a direct spin off from the Open Fun Football School programme. Furthermore, several Open Fun Football Schools, which started 20 years ago, are still running on their own, and that the food chain of new young volunteer leaders and coaches to these schools is being mobilized and trained continuously as other volunteer young people drop out of activities again.

Where do we go?

OFFS has proved to be an efficient instrument to gain access to local communities and to mobilizing volunteers and community stakeholders for peace and reconciliation initiatives.

For further information about our Open Fun Football Schools, please go to Statistics or get insight in how we work educate our volunteer coaches through manuals and handbooks in the Toolbox.

Click on the image above to see how each of these groups were represented in 2017.