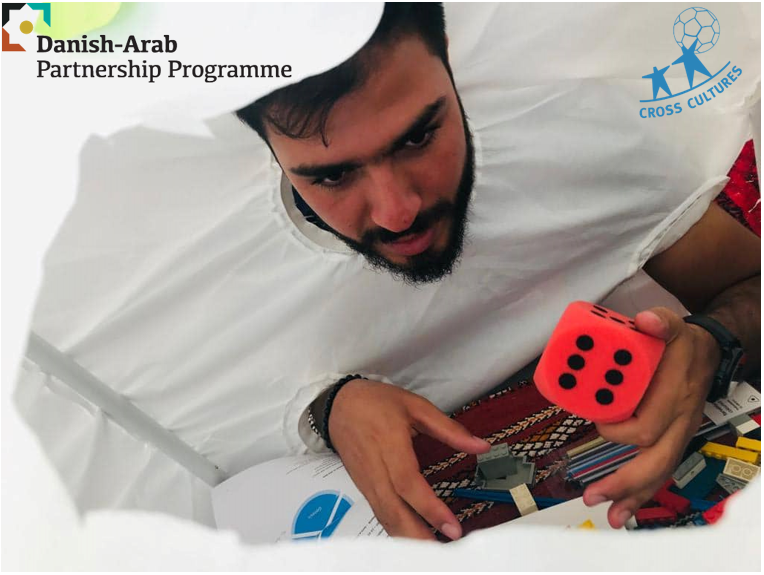 In September 2019 Cross Cultures attended The Youth Dialogue Festival (Ungdommens Folkemøde)in Copenhagen. At the festival, the Danish-Arab Partnership Programme (DAPP) hosted a tent where Cross Cultures organised a creative workshop for the youth visiting the festival. To help with this, six Cross Cultures volunteers from Morocco, Jordan and Tunisia joined the fun workshop. The themes of the workshop were voluntarism, influence and social network. To create a dialogue concerning the themes, the participants and the volunteers ‘met’ in white covered boxes and through exercises they build their visions in LEGO together.

The final models displayed several different and fun ideas as a product of positive debate and new relations established in the boxes. The purpose of the workshop was to create common dialogue and visions between the danish youth and the volunteers, regarding the three subjects: voluntarism, influence, and social network. Thereby establishing relations between the participants and the volunteers. The response from our visiting volunteers was exciting and argued they had invalidated stereotypes, revalued their opinions and that the danish participants had expressed the same. Overall a fun and interesting way of exploring relationships between the Danish and Arabic youth.

The volunteers from Morocco, Tunisia and Jordan spent the week in Copenhagen visiting various organisations and sports clubs, such as FC København, Fremad Valby and The Youth Island in Copenhagen. The different activities focused on improving safeguarding children in sports, establishing dialogue and creating visions for Cross Cultures.

One volunteer said that experiencing how parents are volunteering as football coaches in their children’s clubs was eyeopening, because of how sustainable, yet simple it is. The volunteer used the experience as a case in his presentation of his visions for Cross Cultures at the end of the week. Our volunteers from Morocco said that meeting several volunteers from all ages and seeing how sports is a part of everyday life in Copenhagen encouraged them to do the same.