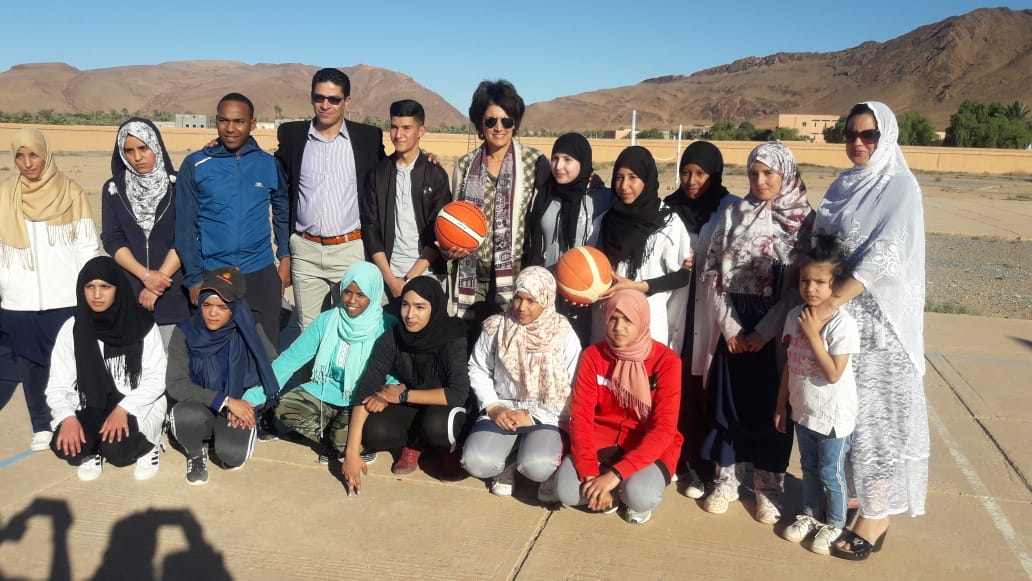 On Friday December 28, a sports day was held in Taghjijt (Guelmim province) in order to raise awareness of the importance of sport in various fringes of society and age groups and to promote the exercise and physical activity.

In a festive atmosphere to the sound of popular songs, the event was organized in the form of sporting, recreational and educational activities, as well as traditional games, in the presence of representatives of the local authority, elected bodies and civilian society actors, benefiting hundreds of young students.

The event was organized in cooperation with the Alkarama Feminist Association for Development and Solidarity in the region of Guelmime and Wad Nun. Their president Samira Oubella expressed her satisfaction with the visit of the Caravan to this remote region with the aim of encouraging women and young people to exercise sports, especially because of its great benefits to health and mind.

The Caravan attracted in particular hundreds of children, girls and women who benefited from sports workshops and popular traditional games.

On Sunday, the Social Welfare Foundation in Bouizakarne hosted a sports day organized with the help of the Moroccan Association for Women model, and the municipal council.

The sports program has included various activities, including basketball, volleyball, handball, athletics as well as traditional games and fun football matches between girls and boys.

The President of the Moroccan Association for Women Model Mrs. Juma Maâlainin, expressed her pleasure to organize with the kind help of the Association “Woman, achievements and values”, this event sporting, recreational and educational day calling for redoubling efforts to push the sports movement in the city, which still lacks the sports facilities that will attract young people of the city and contribute to the refinement of their talents in different sports types.

On Monday, the Association organized a sports day with the Adai Community, which was attended by 300 male students and 120 female students representing a group of primary schools, preparatory and secondary institutions in the rural world.

The program included sporting, recreational and educational activities, especially women’s fun football and traditional games, which were welcomed and created a festive atmosphere with which they interacted greatly.

“Women’s achievements and values” Association culminated in the activities of its sports team organized a sports day for the inmates and women of the local prison Ait Melloul  II (close to Agadir) under the theme “Sports for all prisoners” to celebrate with them in New Year 2019.

The event was very important for the prisoners, including young people, as part of their efforts to spread the culture of sports practice in prison institutions as a right for all.

The Director of the Prison and Reintegration Department in the Souss Massa region, Mr. Saad Abdel Chafik, praised the initiative of the “Women Achievements and Values” Association, which coincided with the celebration of New Year’s Day. He said that the exercise of sports activities will reduce the burden of detention and bring joy to the hearts of these prisoners.

In a speech to prisoners, Ms. Bidouane said that the programming of sports activities in prison institutions is a means of rehabilitating their inhabitants and making them aware of the spirit of sport based on the principles of love, tolerance and proper integration in their society.

Mrs. Bidouane says also that she thanks the elected bodies, the authorities in the different visited regions and communities for their help and of course that she is grateful to CCPA for it continues support to such huge and important initiative.

The next Caravan will take place in Driouech a province of 160.000 inhabitants in the Rif mountains north of Morocco.